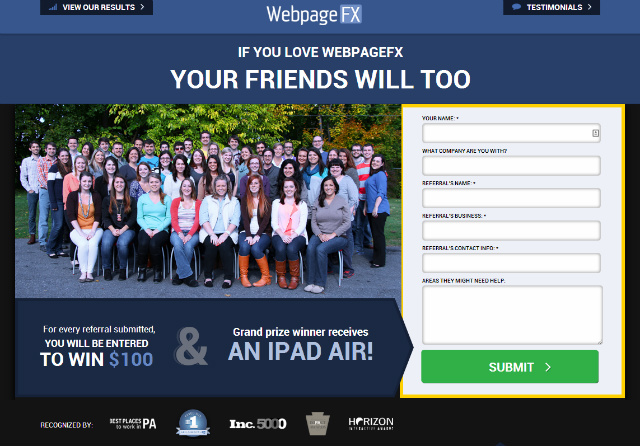 A great way to build brand loyalty is through customer contests. Here are eight ideas to get your creative juices flowing.

1. Get Snap Happy. Photo contests are a lot of fun and incredibly easy to participate in since so many of us have smartphones. So what type of photo contest should you have? Two ideas: “Show us your ugly…” or “Show us your pretty…” contests. For example, if you make custom cabinets, you could hold a “Show us your ugly kitchen cabinets” contest. The owner of the ugliest cabinets—voted on by fans/customers—wins new custom kitchen cabinets designed by your firm. Or if you own a pet kennel service, you could have a “Show us your cutest pet” contest. The winner gets to board his or her pet for free for three nights. You get the idea. Then give all the participants an inexpensive cell phone pocket just for participating! You win too because your business gets remembered long after the contest ends with your company name on the cell phone pocket!

2. Make Local Connections. A well-known Boston retailer named Jordan’s Furniture held a “Perfect Game” promotion in 2013. The premise was simple, as stated on the website, Boston on a Budget: “Buy furniture and merchandise now at Jordan’s until May 5, 2013 and receive your furniture for free if a Red Sox pitcher pitches a perfect game between July 17, 2013 and October 1, 2013.”

No one pitched a perfect game that season, but that didn’t matter. It was exciting for contest participants and casual observers alike. And Boston fans didn’t suffer, since they went on to win The World Series anyway. Speaking of which, Jordan’s Furniture has a new promotion this year: if the Sox repeat their World Series victory, everyone who bought furniture from Jordan’s before May 18, 2014, will get a full rebate.

You could do something similar. No, you probably don’t have the funds to do a tie-in with a major league sports team, but why not hook up with a local sports team (or dance troupe, drama club, cub pack, etc.)? Linking your contest to something local and something beyond your business is a great way to get even more exposure since the local group would promote the contest to its fans, customers, and databases.

3. Get Inventive with Social Media. No matter what type of contest you run, social media will play a role in promoting it and getting people engaged. But you could use social media as the basis of your contest. Remember the Twitter contest that Esurance ran right after the Big Game? When anyone tweeted the hashtag “#EsuranceSave30” during the entry period, the person was automatically entered into the contest. A winner was randomly drawn and won 1.5 million dollars (the amount of money Esurance saved by airing a commercial AFTER the Big Game).

If you have a healthy Twitter following, you could do something similar (OK, minus the 1.5 million dollars). Make it easy for people to “play”—just ask them to tweet a line with a hashtag that you create. Make sure you have an exciting prize. And make sure you develop plenty of buzz and that you let people know about the hashtag. Then, sit back and watch the tweets pour in (and hopefully watch your Twitter base grow as other people hear about your business and your cool contest).

Of course, it’s not just Twitter where you can have all the fun. You can run contests on other social media platforms as well. Here’s a great article with five sure-fire Facebook contest ideas.

4. Unleash “Our Products in the Wild” Contests. This is a type of photo contest, but it’s worthy of its own explanation. Ask customers to take pictures of themselves using your products. The most creative entry wins a prize. You could make this an ongoing, monthly contest. By making it a regular feature, you’ll have content for…

5. Hold Naming Contests. When it comes to naming a product or service, you want to be careful and thoughtful in how you go about it. Nine times out of ten, you should work with someone who has experience in coming up with brand names. But that doesn’t mean you can’t occasionally have customer input. For example, if you own an ice cream shop, maybe you’re launching three new flavors of ice cream for the season and you want some help in coming up with creative names. Hold a naming contest for a fun prize.

Note: you can get inventive here as well. If you want to avoid muddying up your brand names with “interesting” customer creations, then hold naming contests for benign things, like your organization’s mascot.

6. Don’t Forget Oldies But Goodies. Do you remember in school when you had to guess how many jellybeans were in a big jar (this was usually part of a math or science class)? You could create your own version of this. Fill a huge jar with something relevant to your business. Are you a homebuilder? Maybe you fill the jar with screws. Are you the owner of the ice cream shop we mentioned above? Maybe you fill it with one of the candy toppings you offer, like M&Ms. You get the idea. Create a video where you introduce the contest, show the jar, shake it around, and voila. Get people guessing.

7. Tie It in with the Seasons. The nice thing about seasonal contests is that you can foster anticipation for them year after year. It doesn’t even have to be “your” season to be effective. For example, a landscape company might hold a contest during December where people send in the light displays on their home. The best one—as voted on by fans—wins a prize. Now, landscapers aren’t necessarily looking for business in December, but it could be a great way to stay front and center in customers’ minds during off months.

The seasons, and their corresponding holidays, have tons of potential. A restaurant could hold a contest in January, and the prize could be a special Valentine’s Day package, like dinner at the restaurant and a night at a local hotel. All people would have to do is email their answer to a simple question: “Tell us who you want to whisk away for a romantic weekend, and why.” You could share snippets of entries—sweet ones, funny ones, clever ones—on social media to get people excited.

Think of all the holidays out there—from well -known ones to holidays that are more obscure. You could have a blast coming up with a unique contest that engages fans and promotes your business.

8. Make it Kid Friendly. People love rallying around contests that involve kids. For example, Google holds a “Doodle 4 Google” contest every year where it invites kids to submit their own Google doodles. The grand prize includes scholarship money (a prize that’s always welcome!) and a trip to Google headquarters (among other fabulous prizes). Running a contest for kids and offering scholarship money as a prize is a great way to help kids and get exposure for your business.

Need a kid-friendly example that applies to a small business? A coffee shop, restaurant/diner, or bookstore could hold a drawing or painting competition. Finalists’ entries would be displayed in the business, and patrons would vote for the winner.

Housekeeping Details: Some Reminders before You Launch a Contest

Have you ever run a contest? We want to hear how it worked out. Share your experience in the comments below.